Getting a moderate amount of plant substances called flavonoids through food may be linked to a lower stomach cancer risk in women - but not in men, according to a European study. The researchers, writing in the American Journal of Clinical Nutrition, found that women with the highest intake of flavonoids were half as likely to develop the disease as women who had the smallest intake. "A flavonoid-rich diet is based on plant-based foods (such as) fruits, vegetables, whole grain cereals, nuts, legumes, and their derived products (tea, chocolate, wine)," lead author Raul Zamora-Ros told Reuters Health by email.

For the study, the researchers turned to ongoing research following almost 500,000 men and women in 10 European countries. All of the participants were between 35 and 70 years old, and had been part of the study for about 11 years. During that time, there were 683 cases of stomach cancer, of which 288 occurred in women.

The researchers analyzed the participants' food diaries to see how many flavonoids they are on average, then they checked to see whether or not that amount was linked to the participant's cancer risk.Green tea contains a large amount of flavonoids, with more than 12,511 milligrams (mg) per 100 grams (g) of leaves. Pinto beans also contain a lot, with about 769 mg per 100 g of beans. Women who got more than 580 mg of flavonoids per day had a 51-percent-lower risk of developing stomach cancer than women who consumed no more than 200 mg a day. 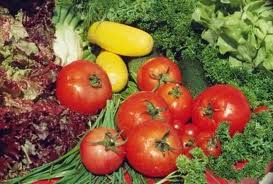 My take: People eating a wide variety of foods, especially fresh foods, will naturally have a higher flavonoids intake.  This is one more great reason to eat a colorful, plant-based diet.

Email ThisBlogThis!Share to TwitterShare to FacebookShare to Pinterest
Labels: Flavonoids

Dr. Jody Vogelzang, RD, LD
As a registered dietitian and educator I am very interested in how the environment affects health and food choices.